The Lok Dim Boon Kwan, or "Six-And-A-Half Point Pole", is the first stage of the Wing Chun practitioner's dedicated armed combat training. The Long Pole teaches specific lines of force that when applied make any two-handed weapon (from a broom handle to a walking cane to a bayonet fixed on a rifle) a very deadly instrument.

Long Pole training makes heavy use of controlling and moving down straight lines.

This is done in order to line up the entire mass of the weapon being used into one minute point, thereby transferring the maximum amount of kinetic energy into the opponent. This also makes it harder for the opponent to stop the attack because the weapon is not being swung in large circular arcs.

The principles of the Long Pole also translate back into the Wing Chun practitioner's empty handed combat through increased power, tighter body structure, and an ability to control an opponent's entire body through small movements at the extension of the practitioner's arms. The physical discipline gained through continued practice with the Long Pole also grants the practitioner a force of will that is unshakable in the midst of the fighting encounter. 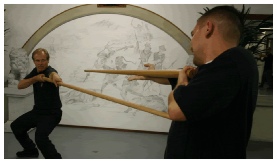